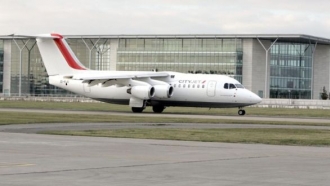 CityJet’s parent company has sold VLM, the regional carrier bought by the Irish airline eight years ago, to its management who want to re-establish the business as an independent operator.

The news followed CityJet announcing plans to step up its Dublin-London City Airport service in response to increased competition on the route from BA and Flybe.

The Dublin-headquartered airline’s parent, Intro Aviation, has agreed to sell VLM to its management, led by chief executive Arthur White, for an undisclosed sum.

CityJet bought VLM for a reported £180 million sterling in 2008 and Intro Aviationacquired both businesses when Air France-KLM sold the Irish group to it earlier this year.

Mr White and his colleagues made an offer to Intro Aviation, whose managing director, Peter Oncken, said the German investor “could not refuse” and the deal was agreed at the weekend.

The transaction is likely to be formally completed next week. Neither side revealed any financial details, but it is thought VLM’s management paid less than the amount for which CityJet bought the regional airline. Mr White will be the majority shareholder.

VLM spokesman Steve Blair said yesterday the company planned to re-establish itself as a independent airline with its own scheduled services: “Prior to being bought by Air France-CityJet we had 14 years of sucessful independent operation. We would like to think that we have a great future now it’s back in our own hands.”

The company operates services from Antwerp and Rotterdam to London City under a lease deal with CityJet and that arrangement is set to continue, despite the change of ownership.

It has a similar relationship with Guernsey carrier Aurigney and also has a charter business. VLM owns 12 Fokker 50 craft and had revenue of €40 million in its latest financial year.

et said yesterday that it will increase its Dublin-to-London City flights by 25 per cent and will put on up to nine flights every weekday.

Its move follows the launch this week of services from the capital to London City by both BA and Flybe, adding to competition on the route, which CityJet has operated for 20 years.

“We continue to listen to our customers and they tell us that schedule and service are key to them making their buying decision, which is why we have increased our jet service to up to nine flights a day out of and in to London City Airport,” he said.

CityJet’s new owner is part of the Intro Group, which has interests in aviation, consulting, investing, media and retail.