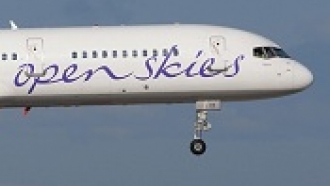 Incident: Openskies B752 at Paris on Sep 20th 2010, rejected takeoff because of wrong flap setting

The airline reported, the takeoff was rejected at high speed due to an inconsistency between what the crew expected and got to see on their instruments. The airplane slowed safely and vacated the runway, the aircraft received minor damage to tyres and wheels consistent with a rejected takeoff at high speed. A replacement aircraft was dispatched to Newark.

Sources within the airline reported, that the takeoff was rejected because a of wrong flap setting, flaps deployed to 1 degree only with another flap setting having been planned. After the airplane had vacated the runway, air traffic control advised of smoke from the landing gear, emergency services responded and cooled the brakes, however not before six tyres had deflated. The incident airplane resumed service 2 days later